My daughter is now 27, so it was a real flash-back to speak to Mary Hoffman, the author of the lovely book ‘Amazing Grace’ which we read, re-read and read-again to her as a child. Life has changed dramatically over those 27 years; for us as a family, but for society in general. Sadly, however, in terms of progress and deep and significant change in areas of Racial Justice and Race Equality, often plus ca change, plus c’est la meme chose. The Archbishop of Canterbury’s acknowledgment this year of institutionalised racism in the CofE and the publication of the report ‘From Lament to Action’ was shocking but unsurprising. Let’s hope that together we can make things happen………..

Picture in your mind’s eye a vision of ‘Beautiful Babies’ – I’ll return to this later.

A word that wasn’t really at the tip of most people’s tongues, or indeed in their lexicon, became daily parlance, especially and even for teenagers during the now named ‘exams fiasco’ in 2020. The word of course : Algorithm. In various online dictionaries, part of the explanation of the word says ‘algorithms are unambiguous’ – with the implication that they are therefore correct. Tell that to the thousands of parents and teenagers caught up in the justifications and categorical statements by the then Secretary of State for Education when the furore was widespread…………………

Having on several occasions been the only person wearing a red rugby shirt and donning a daft dragon hat in the mass of white England jerseys in a particular area of Twickenham Stadium on international days, I had an (enjoyable!) sense of being very different. The mood was always light-hearted, with positive expletive feedback for my lone singing! I’m not so sure I’d feel as safe in a similar soccer situation, but that’s another story.

Over many years, each time I’ve been to an African country, at some point I’ve had the skin on my arm touched, and my hair stroked – routinely by children, but often by adults. I’m different.

Celebrating difference, when undertaken positively and in a celebratory way, can be mutually affirming, educational and transformational. Where difference is highlighted negatively, or intentionally to make one feel second-rate and an unseen minority, it can have really terrible effects, especially if reinforced over time, be that subtly or categorically, intentional or unintentional.

Algorithms can play an important part here, and can be a force for good as well as damage. So, back to my opening question – what image came to mind with the ‘Beautiful Babies’ prompt? Whatever your natural response to the prompt, why not type ‘Beautiful Babies Images’ into Google. An algorithm is at work – hence dozens of white babies; typically with blue eyes. I’m told that Twitter is no better, because the image cropping algorithm there apparently has a coded implicit bias also against age and disability as well as race.

We know how important it is for children to have good role models, and how influential these can be especially if the role models inhabit the worlds of sport, music or fashion. It took many years for the TV News programmes to have female presenters; then presenters who were not white; and eventually presenters who spoke with a regional accent! Adults and children receive implicit, and subliminal messages if ‘the norm’ is always someone very different to oneself. Who hasn’t chatted to family when your home town features on TV, or an alumnus ‘makes good’ – all part of belonging and feeling recognised, represented and not marginalised.

Some months back I read about a community school in one of our Local Authorities, focusing on Mary Hoffman’s storybook ‘An Angel Just Like Me’ as a way of celebrating Christmas, but also as a vehicle for asking deeper questions and embracing a whole host of curricular links to focus on inclusion and representation. That prompted me to share some ideas with colleagues, and subsequently, speaking with Mary Hoffman, I commend to you this mini-project for Christmas. I hope you’ll embrace it, and would be delighted if you forwarded the Project Booklet to churches and neighbouring schools that are not part of our Diocesan network.

The book is currently out of print, but second-hand copies are readily available online. Mary has recorded herself reading the book especially for us. A Worship Powerpoint and the Video is being shared separately, and can be found on our website for any interested schools and churches outside our Network.

Mary is also looking at her availability to meet with some children from our schools for an interactive session. My sincere thanks to my colleagues Jane and Sue for running with my ideas, and for the quality resources they have written in these pages. I know you’ll develop it even further in your own settings so please take photos and let us know what you’re doing – so we can feature you and share with Mary Hoffman.

Meanwhile, each time you’re in a supermarket or store near Christmas cards, decorations or tree items, (and indeed, online) I challenge you to find a black angel. Good luck!

If you'd like to know more about this project please get in touch with Jeff Williams, Director of Education 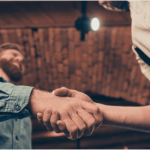 More Articles by Diocese Of Winchester

This weekend youth worker, Helen Chatfield from the benefice of North Hampshire Downs took a group of nine Ukrainian teenagers, who are part of her youth group at All Saint’s Odiham, on a sailing adventure hosted by the Morning Star Trust. The youth group is now made up of 40% Ukrainian children. The youth group […]

Each year our Bishop’s send out a Christmas card and this year we asked our Church of England school students to submit their designs of the Nativity Story. From the 63 designs submitted four designs were chosen to be this year’s cards. Congratulations to our winners: Diana H. from St Mary’s CofE Primary School Olivia […]

St James Pokesdown Advent installation Inspired by Winchester Cathedral’s light of hope, St James Pokesdown have made their own version using some plastic tubes from Dorset Scrapstore! Light of Hope Schools Project The Priory Church of England Primary school took part in a ‘light of hope’ project to mark the start of Advent.  During a […]