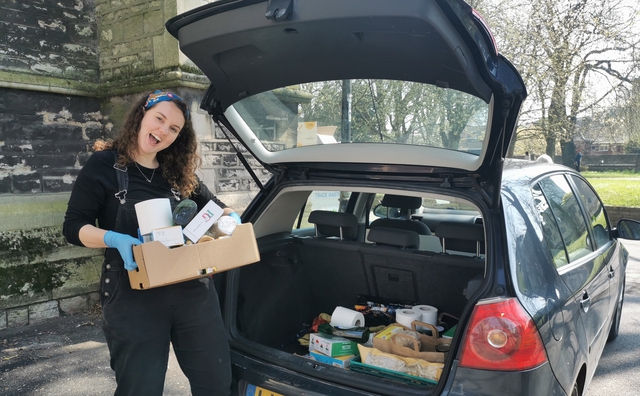 This week Saint Mary’s Southampton marked its two-year anniversary with the launch of a new ‘Social Supermarket’ to tackle food poverty in the city.

Since it was relaunched as a city centre resource church in 2018, the team at Saint Mary’s have offered a range of support to people in the local community. From the beginning of the COVID-19 lockdown they have seen a surge in the numbers of people approaching the church for help, particularly from those facing food poverty.

Food poverty is a growing issue for the city, so during the Covid-19 restrictions the church building was transformed into the food bank hub for the city. The hub delivered over 80,000 meals to some of the most vulnerable households across Southampton, with young families being in greatest need, accounting for approximately 70% of the recipients of food parcels.

In order to help tackle the rising problem of food insecurity among families, the team at Saint Mary’s, led by Reverend Jon Finch, are now launching a new ‘Social Supermarket’ to help people out of food poverty. A mini supermarket is being set up in the church, and people in need will be able to become members so that they can purchase food and other items at a nominal cost. The membership model is intended to create community and shared dignity while also giving users greater choice.

The Social Supermarket at Saint Mary’s is being launched in partnership with Southampton City Mission and will also be able to offer members a range of other services to help those in hardship or dealing with difficulties worsened by the pandemic. As well as helping to meet the city’s food needs, it will offer debt advice, counselling for mental health issues, and a range of resources to help people who are out of work get back into employment.

Since its relaunch in 2018, one of Saint Mary’s most successful projects has been the Alpha course. Over the last two years the course at Saint Mary’s has offered over 200 people a relaxed and welcoming way to explore their faith. As part of the anniversary celebrations a small service was held on Lepe beach, and five people who had come to know Jesus at Saint Mary’s were baptised in the Solent.

Speaking on the two-year anniversary of the relaunch of St Mary’s, Reverend Jon Finch said:

“Our deepest hope is to continue to see people come to know and follow the way of Jesus, and for our city to be renewed by the love of God as we compassionately, courageously, and creatively serve this area. We care deeply for our local community and pray that through our mission we can help to alleviate some of the acute difficulties that the city is going through right now. As a church we want to be known for showing love and kindness to the people who live in Southampton.”

“What Jon and his team at Saint Mary’s have achieved over the last two years is remarkable. They have created a thriving Christian community which is living out the mission of Jesus and making a real difference for those in need in the city centre. Over the next six months, as we continue to face coronavirus restrictions, and increasing numbers of people suffer financial hardship, it’s clear that Southampton will need Saint Mary’s more than ever. I hope that the success they’ve had in Southampton will inspire other churches and faith groups throughout the Diocese and across the country.”

The relaunch of Saint Mary’s Southampton in 2018 was supported by the Diocese of Winchester with funding from the Church of England’s strategic development fund. In the two years since Reverend Jon Finch and the vibrant worship team opened the doors of Saint Mary’s, the building has been renovated and refurbished and has welcomed people of all backgrounds.