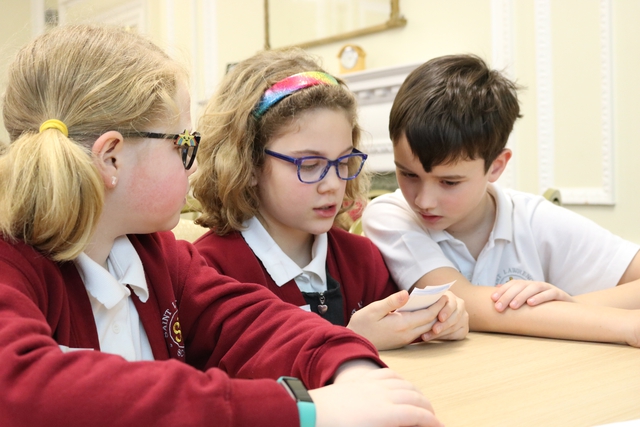 Some 150 Year 6 and 6 pupils from 19 schools across Portsmouth and Winchester dioceses took part in workshops at Old Alresford Place and on the Isle of Wight, to mark Holocaust Memorial Day and the 75th anniversary of the liberation of Auschwitz.

The children were asked to bring a special object to the workshops. Many brought teddies or family photos, others items included a dancing trophy and a fountain pen which had belonged the child’s grandmother. Pupils talked about what they might pack if they had to put a few items in a suitcase or backpack and leave home. Lively discussions followed with children placing items on a continuum line and discussing whether a first aid kit was more useful than a torch, or whether they’d rather have a woolly hat or a pillow for the journey. Children compared their responses with research about Syrian refugees and what they carried with them in their backpacks when fleeing the country.

Pupils took part in a detective activity, piecing together clues to find out what had happened to Susanne Flanter, a 13 year old who had escaped from Nazi Germany and started a new life in London. They discovered that Susanne had been part of the Kindertransport before she was finally fostered by a Jewish family. Susanne was keen for the world to know about the sacrifice people had made to give her a future, and that the story of the Holocaust should never be forgotten.

Pupils debated whether the events of 75 years ago should be remembered or whether it was more productive to look towards the future. Most of the children decided that it was important to keep alive the memory of the Holocaust and to learn from the mistakes of the past; some of them mentioned refugees from Syria and Afghanistan and recognised that atrocities were still taking place around the world today. They recognised that there were pressing issues such as the climate emergency that needed to be addressed and they talked enthusiastically about changing the world to build a better future.

Finally pupils wrote poems to express ideas about standing together with others:

We are grateful for the energy and creativity invested by Jane Kelly in these sessions. . Dawn Casson, headteacher at St Lawrence Church of England Primary School in Alton, said: ‘Thank you for a super afternoon. The children were buzzing with thoughts and reflections on the way back. A fabulous opportunity.’