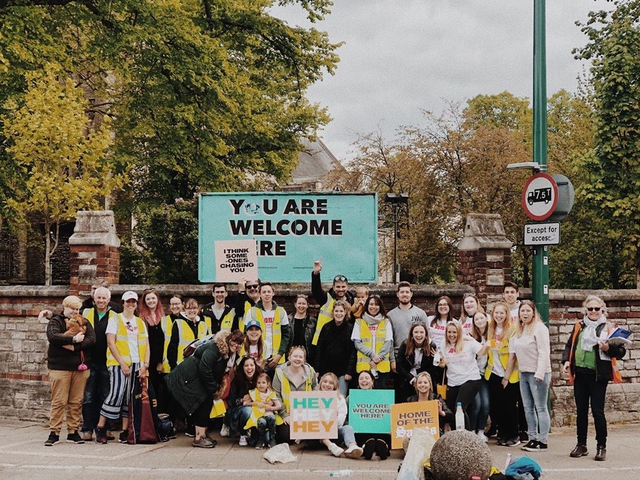 Two weeks ago on Friday 27th September, Saint Mary’s Southampton celebrated its first anniversary serving as a Holy Trinity Brompton (HTB) resource church. And it has been a big year.

Geared towards reaching the younger generations, Saint Mary’s congregation has pushed past growth barriers, exceeding the original number of approximately 50 parishioners, to become an energetic and vibrant congregation reaching towards 350. But then, expansion was always part of the plan.

Nationally, the church is undergoing an exodus. Statistically, only 2% of young adults choose to affiliate themselves with the C of E, prompting initiatives such as resource churches to be strategically placed throughout the UK. Last year as Saint Mary’s began her journey, Rev Jon Finch said, ‘Our desire is to see this stat reversed and have young people flooding to church to find meaning and purpose’. One year on and ‘the call of becoming a resource church to grow big, to give big’ is becoming a reality.

In addition to establishing a thriving congregation, the Saint Mary’s team have taken an intentional approach to both the use of its resources and a missional call to move ‘towards a bigger vision of constantly giving themselves away’. Keen to play their part in Southampton’s social and cultural renewal, Saints in the City Days encourage whole church participation in connecting with their local community in a practical way. Litter picking, gardening, house clearing and playing football with young people in Hogland’s Park all move the church beyond its own four walls to meet those around them where they are.

It’s also been a year of active listening. Conversations through working relationships built with Southampton City Council and local social care services are reflected back through social transformation Saints in the City projects such as Speakeasy and a partnership in a new Winter Night Shelter.

Speakeasy, an English conversation cafe due to begin in November addresses a need highlighted by two local English language teaching schools. Primarily for asylum seekers and refugees, the cafe will provide a much-needed place to practice and improve English conversation, breaking down barriers of intimidating isolation.

As a venue for the National Census for the Homeless this November, the church will provide some accommodation to those counted by census takers. This will act as a trial run for January 2020 when Saint Mary’s, in partnership with six other city centre churches, opens a Winter Night Shelter. Working alongside Southampton City Council and the Society of St James, there will be thirteen beds ready for referrals providing a safe, warm, friendly environment with a meal, accommodation and breakfast for the coldest four weeks of the year.

Having observed local youth hanging around aimlessly, the church entered into discussions with local authorities and the result will be a monthly youth drop in starting at the end of this term. This is a church listening to and walking out to meet the people and needs of their city as they go, creating welcoming pathways for those who don’t feel they belong in church.

Reflecting over the past year, Rev Finch said he’d ‘massively underestimated what they would be able to do in one year’ and was ‘excited to think about what could happen in the next five’.

The future of Saint Mary’s is about moving forward while looking outward, and their message is clear, whoever you are: You are welcome here.